How I Finally Stopped Binge Eating 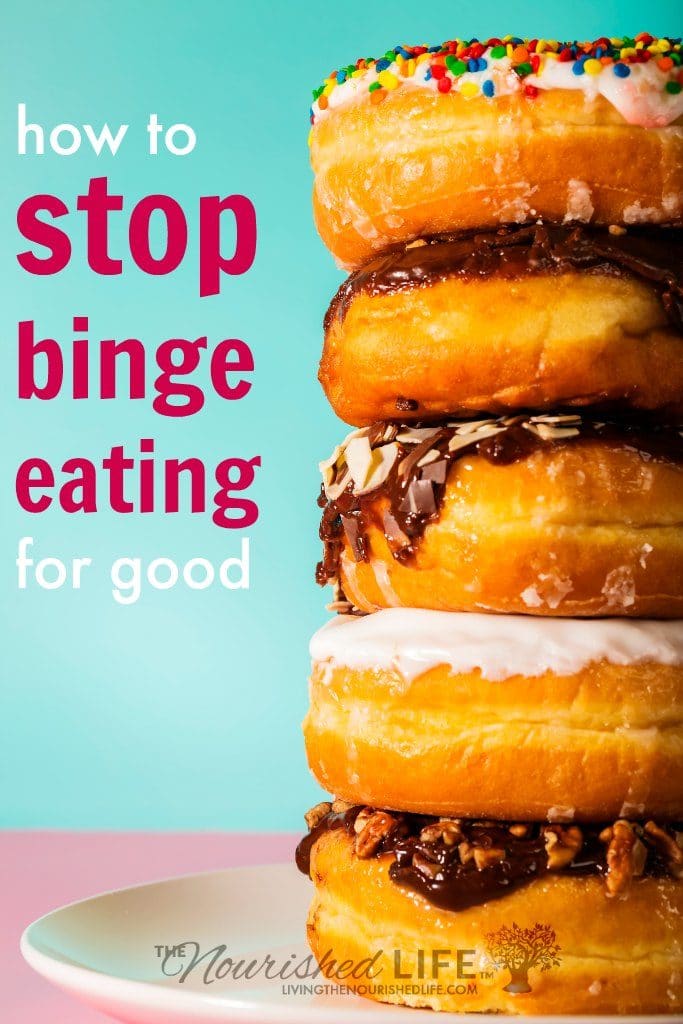 I know what it feels like when you can‚Äôt stop binge eating. Binge eating can feel like a monster inside you, waiting to pounce on the next pizza or candy bar that comes your way. I‚Äôve downed a 1/2 gallon of cookies and cream ice cream‚Ä¶ all in one sitting. Binge eating is a hard cycle to break, but I was able to do it once I tackled the underlying causes.

The Shame of Binge Eating

Binge eating is not something I‚Äôve talked about much. Eating an entire pizza wasn‚Äôt exactly something I wanted to brag about. In fact, I was downright ashamed every time I ended up on a binge.

And that‚Äôs exactly where the shame comes from ‚Äì all those shoulds.

Shame comes from believing there‚Äôs something deeply wrong with us. Guilt, on the other hand, is about behavior. I might feel guilty about eating too much ice cream because I know it wasn‚Äôt a healthy choice‚Ä¶ but shame goes deeper.

Shame says I am seriously messed up for eating that ice cream. A failure. A fat pig. (Notice the name calling ‚Äì shame often comes with name calling attached.)

The problem is that shame and silence keep us stuck. So I‚Äôm here to say, if you can‚Äôt stop binge eating ‚Äì you‚Äôre not alone. You‚Äôre just human, and it‚Äôs okay.

Here are a few interesting facts about binge eating:

Binge eating may not be a healthy behavior, but shaming yourself isn‚Äôt either. And two wrongs don‚Äôt make a right. üòâ

For me, binge eating was part of a larger cycle ‚Äì all centered around shame ‚Äì that I put myself through for years. It went something like this: 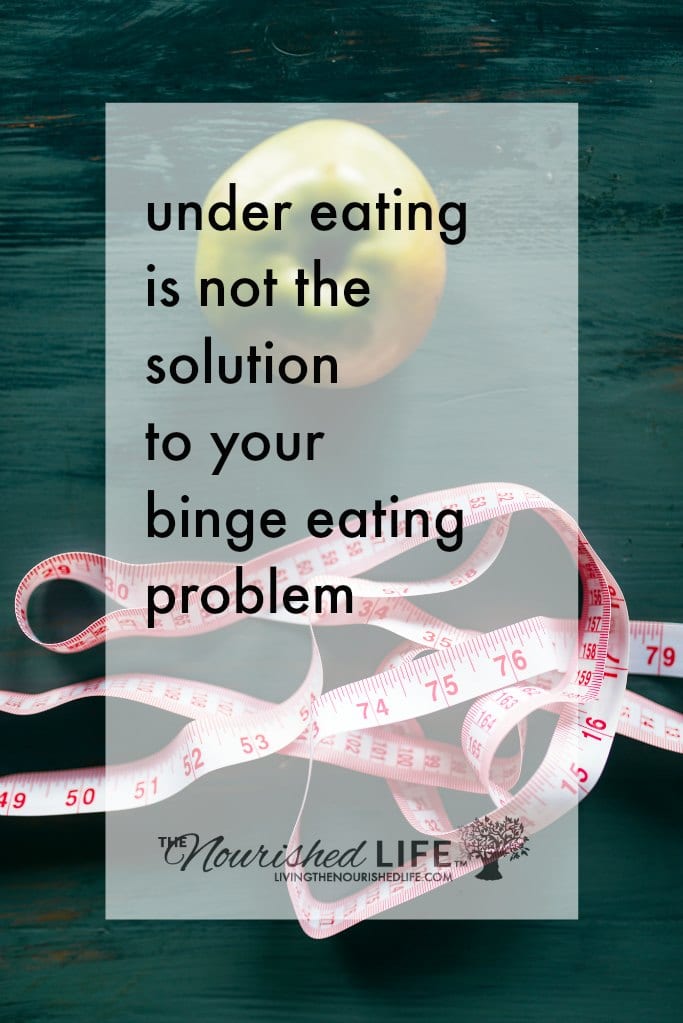 Before I move on to how to stop binge eating, I want to talk about what binge eating really is‚Ä¶ and what it isn‚Äôt.

Binge eating is when you eat a very large amount of food in a short window of time. Binge eating feels compulsive and out-of-control. You may feel full to the point of sickness, but still feel compelled to eat even more.

I like to make an important distinction between binge eating and what I call splurging. I‚Äôve seen a lot of women talk about binge eating, when actually they simply ate an extra slice of pizza and some ice cream for dessert.

Splurges are normal and part of being a healthy human. We all eat an extra piece of cake at a birthday party, indulge a little too much at a holiday dinner, or have a burger and fries now and then.

This can feel like a binge if you‚Äôre stuck in a mindset of restriction and trying to eat as little as possible. In some cases, the ‚Äúbinge‚Äù was actually just eating a normal meal when you‚Äôre trying to stay on an extremely restrictive diet.

Yes, sometimes this can feel very compulsive‚Ä¶ because you‚Äôre starving yourself. When your body perceives a famine (even when it‚Äôs a self-inflicted famine), its reactions can be extreme. More on that in a minute.

Unhealthy habits are when you might splurge too often, maybe even daily, or you might tend to eat foods that are easy to overeat on a regular basis.

So while you might not even sit down and eat an enormous amount of food in one sitting, you tend to always eat a little beyond the point of fullness, or snack out of boredom, or indulge in treats for fun.

Unhealthy habits are less compulsive but can still feel difficult to overcome.

How to Stop Binge Eating

‚ÄúAn ounce of prevention is worth a pound of cure.‚Äù This old saying definitely applies to binge eating.

At the moment where you feel compelled to binge, it can be extremely difficult to stop. The best way to stop binge eating is to prevent the triggers that cause it in the first place.

How I Accidentally Stopped Binge Eating

Several years ago, I was convinced I had no power to stop binge eating. In those moments when my stomach felt like a bottomless pit (even when I technically felt full), the idea of willpower was laughable.

I tried distracting myself. Silly things like painting my nails or reading a book did absolutely nothing to take my mind off food.

And when I was craving brownies? No amount of carrot sticks could stop me from wanting those brownies. Best case scenario? I end up eating the carrots and then the brownies. There was never once an occurrence when I ate the carrots instead of the brownies.

Nothing I did to stop binge eating actually helped me. But I had way more problems than just binge eating. I had worse acne than when I was a teenager, insomnia that left me exhausted every day, scary mood swings, and the smallest stress felt like the end of the world.

Binge eating felt like small beans compared to everything else I was dealing with. But as I explored what it means to be healthy and happy, my binges slowly became a thing of the past. 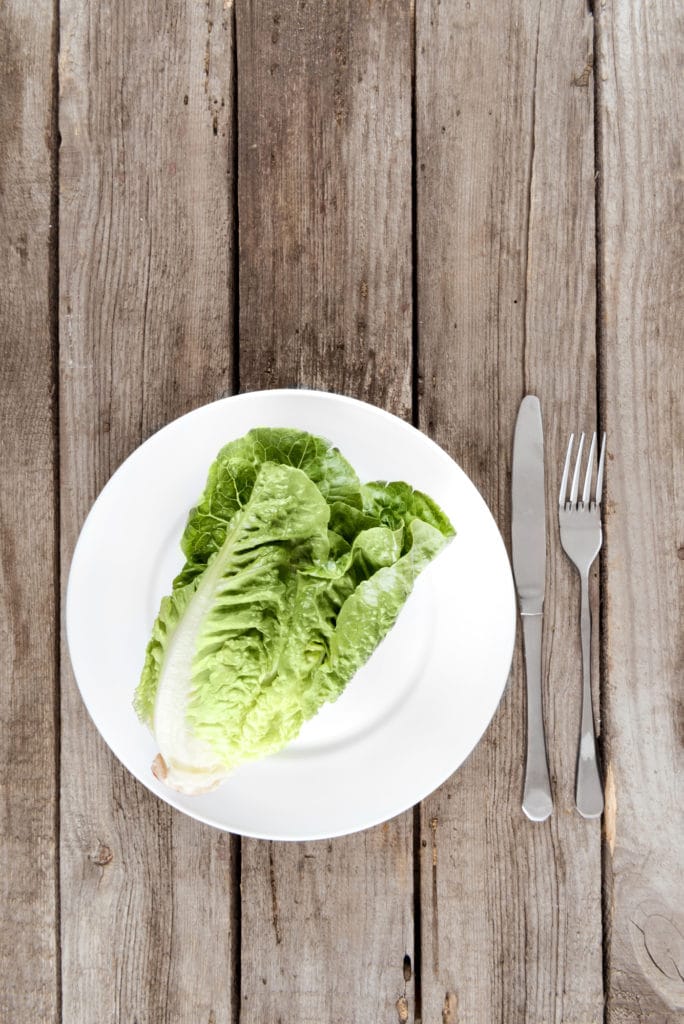 Did you know‚Ä¶ restrictive eating can trigger binges? Like I mentioned earlier, dieting triggers a famine response in the body.

This means that when your brain thinks food is scarce, it laser focuses on what you‚Äôre going to eat next. And if high-calorie food is available, your brain says, ‚ÄúEat it! Eat it all or you‚Äôll starve to death!‚Äù

The thing is, your brain can‚Äôt tell the difference between an actual famine and a low-calorie diet. (One might argue that there‚Äôs not much of a difference anyway.)

It took me a few years to break free from the dieting mindset, but I finally did and it made all the difference. Read what happened when I stopped dieting here.

Think about the long game when it comes to your health and your weight. It‚Äôs the small, everyday habits that keep you healthy and happy.

What is the dieting mindset?

For me, letting go of the dieting mindset meant letting go of way more than just dieting. It‚Äôs how you approach food, exercise, and health in general.

Here‚Äôs what I changed while letting go of the diet mindset:

All this did not happen overnight. It was a slow (sometimes painful) dance of two steps forward and one step back.

But eventually, I was able to strike a pretty comfortable balance of eating well, enjoying a wide variety of foods in moderation, and being active in a way I really enjoy (without overdoing it).

I never tried not to binge. I just wanted to feel healthy and happy again. And slowly, my sleep got better. My moods became more balanced. My skin started glowing more.

And something else happened during this time. Without even trying ‚Äì without even thinking about it ‚Äì I stopped binge eating.

It didn‚Äôt happen all at once. At first, my binge eating episodes just occurred less frequently (like maybe 3-4 times per month instead of twice a week).

Then a few weeks would go by without a real binge. Then a couple of months. Pretty soon my all-out binges were few and far between.

Now? I can‚Äôt even remember the last time I really binged on something. It‚Äôs been that long.

Why? Because I was finally listening to my body and giving it what it needed: plenty of quality food, good rest, and the right amount of exercise. I found my balance.

The more I paid attention and gave my body what it needed to thrive, the more binge eating became a thing of the past for me. 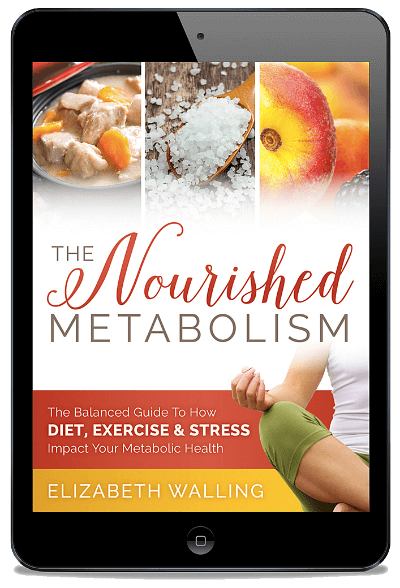 You can also read more about how I learned to eat and exercise in a way that nourished my metabolism (without stressing about it!) in my book The Nourished Metabolism.

No gimmicks or magic pills, just a balanced perspective on how you can improve your metabolic health with simple changes to your diet and lifestyle. Click here to check it out. Elizabeth is the founder of The Nourished Life and has been writing about natural living for 12 years. Her work has been featured at Shape, Bustle, and Mother Earth Living. Her mission is to help you lower your stress levels and find fun ways to become happier and healthier. Read more about Elizabeth here.